There are a few items that every pilot needs to keep in their . A paper chart or two, a chart plotter, and a flight computer are must-haves.

Wait…a computer? Do pilots have to carry an entire computer just for flying?

Most flight computers are based on the basic design used by the Army Air Corps in World War II, the famous E6B. They are variations of a slide rule computer, a gadget that is mostly forgotten about outside of aviation circles.

What is a Flight Computer?

A flight computer is simply a unique calculator that comes pre-programmed to solve the sort of problems pilots face. You could do all of the math you need with a standard calculator, but then you’d have to remember all of the formulas and use them correctly each time.

A flight computer fixes this by providing you with prompts for each problem.

For example, in a time/speed/distance problem, you can input the two you know and get the result quickly. No need to muck around with the algebra of T * S = D, or is it D / S = T?

Here are just a few of the problems every flight computer can help you solve.

Need to quickly tell your European friends how many kilometers per hour you’re flying at? What if your foreign-built plane’s weight and balance chapter is in kilograms? Or maybe you’re flying an older plane with an MPH airspeed indicator, and you need to convert to knots quickly.

Computers can do it quickly and accurately, with no formulas required. 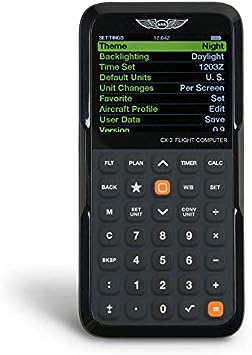 If you’re a little confused when your flight instructor tells you to buy this “computer” and then points to a piece of cardboard, you aren’t alone. The look and feel of the computer have changed a lot since the E6B was invented back in the 1930s.

A mechanical E6B flight computer is a logarithmic slide rule. On the front side, you can solve any multiplication or division problem quickly. The flight computer is remarkable only in that it is pre-marked for doing time computations along with base-10 math problems.

The back of the E6B consists of two parts–a compass rose with a clear window and the flat slide that moves behind it. This part of the computer does wind triangle problems, like figuring out wind correction angles and ground speed for a cross-country flight.

Of course, you can do all of this electronically.

There are websites and apps that you can download for your phone or tablet that will do all of the same problems. There are also several companies making battery-powered calculators that are purpose-built for pilots.

Why are Flight Computers Called “E6Bs”?

You might not have heard a pilot or your flight instructor refer to their “flight computer,” but chances are they’ve talked about their “E6B.”

The mechanical flight computer has been around for a very long time and has remained unchanged for most of that time. US Navy Lt. Philip Dalton perfected the first designs before World War II.

Dalton started his design with a basic circular slide rule similar to what you see on the front of today’s E6Bs. It calculated time, speed, distance problems quickly. Dalton kept tinkering with the design after receiving feedback from pilots and the US Army Air Corps.

The name E6B was the Army’s part designation for the flight computer that Dalton created. The numbers were more or less arbitrary since the Army didn’t have a set numbering system for things back then.

After Pearl Harbor, the Army placed an order for 400,000 E6Bs to give their pilots for the war.

Why Should You Have a Flight Computer?

So why should a student pilot today be carrying around a cardboard computer built in the 1930s? After all, aren’t there better and faster ways to make these calculations than with a piece of cardboard?

The answer is a little yes and a little no. 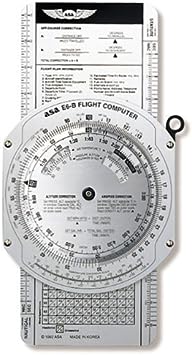 First and most importantly, when you take your FAA knowledge exam (written), you will only be allowed to use a non-programmable calculator and an E6B flight computer. You can use electronic E6Bs, but only if you cannot program them and the FAA has approved them. You cannot use apps or even have your cell phone with you for the exam.

When you take your private pilot ground school you may want to already own your E6B.

The practical exam (checkride) is different, and exactly what you can use is at the discretion of your examiner. But generally, it is expected that you use an E6B for cross-country planning and performance calculations.

What about after you have your license? If you’re flying on your own, you can use whatever planning tools you like.

Even if you use apps like Foreflight, most pilots keep their E6B tucked in their flight bags for the rest of their flying careers. Its batteries never die, and it’s tough to wear out an E6B.

So if all else fails, any pilot should be able to navigate using mechanical tools. If your iPads battery is dead, GPS is NOTAMed unreliable, and the plane’s electric system is toast—what will you do? A paper chart, plastic plotter, and cardboard E6B should be more than enough for any competent pilot to get by.

But once you’ve worked a few problems with the mechanical style computers, you will see that there is very little to be worried about. They’re straightforward to use with the instructions printed right on them.

One big downside of digital calculators is that they can have dead batteries. That’s a bummer if you’re counting on the calculator for a test or an in-flight situation. Even if you want to use one of these, it’s still recommended to pick up a cardboard E6B as a backup. 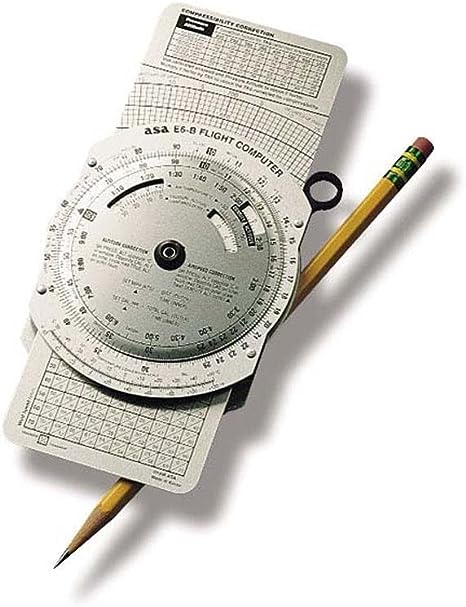 This comes down to cost. Cardboard units are accurate enough and will last for years if they’re cared for. Most pilots use their mechanical E6Bs lightly anyway, favoring tablet navigation and calculators more often.

A cardboard flight computer will do fine for the written tests and flight training for most students.

Metal E6Bs are slightly more accurate and will last forever. But they’re also bulkier and heavier to carry. So they’re suitable for flight instructors or anyone else who thinks they’ll be using their calculator often.

All flight computers offer the same functionality. If it carries the designation E6B, it more than likely has everything you need.

Some of these designs are made with student pilots in mind. Both ASA and Jeppesen models of flight computers include the operating instructions printed on the instrument. How clear those instructions are is important.

If you pull your E6B out after years of disuse, will you remember how to do it? You should, but having the instructions there means you’re less likely to mess anything up.

A few alternative designs have been made over the years, but they haven’t caught on. All mechanical E6Bs look pretty much the same. The smaller circular computers were designed for high-speed aircraft or advanced pilot use. These aren’t appropriate for student pilots, but they’re fun to check out and tinker with while training.

There’s not much variation in the design or function of mechanical E6B flight computers.

ASAs flight computers come in more than three styles. The most inexpensive is a simple cardboard unit. There are also two versions of the metal—a monochromatic and a color version.

For pilots looking for a backup E6B but not wanting to dedicate the space, ASA’s Micro E6B is worth a look. It’s just over seven inches long, so it fits neatly in shirt pockets or those little cubbies in older aircraft.

Jeppesen’s E6Bs are very similar to ASAs, but some pilots find the instructions on the Jepp “whiz wheels” a little easier to follow. This is because they are specifically engineered for student pilots.

Like ASA, they are available in either cardboard or metal.

There’s not a huge market for electronic E6Bs. Most flight training is still based on mechanical computers, and much of the functionality of these computers has been replaced by tablet apps and other planning tools. Only two companies make computers approved for use on the written test by the FAA–ASA and Sporty’s.

Of the two computers available, the ASA computer is the nicest but also the most expensive.

It contains all of the standard E6B functions and combines the functions of a standard calculator. The ASA does more functions than the Sporty’s unit and has a slightly more advanced user interface. Furthermore, the firmware in the unit is upgradeable, whereas Sporty’s unit is not.

The ASA calculator works off of four AAA batteries and has a backlit color display. The unit is far sleeker and more ergonomic than the Sporty’s computer.

Sporty’s has been making electronic E6Bs for decades. The current version is streamlined and straightforward but retains the same look and feel as previous versions. It’s not fancy, and it feels surprisingly cheap and old-school during use. 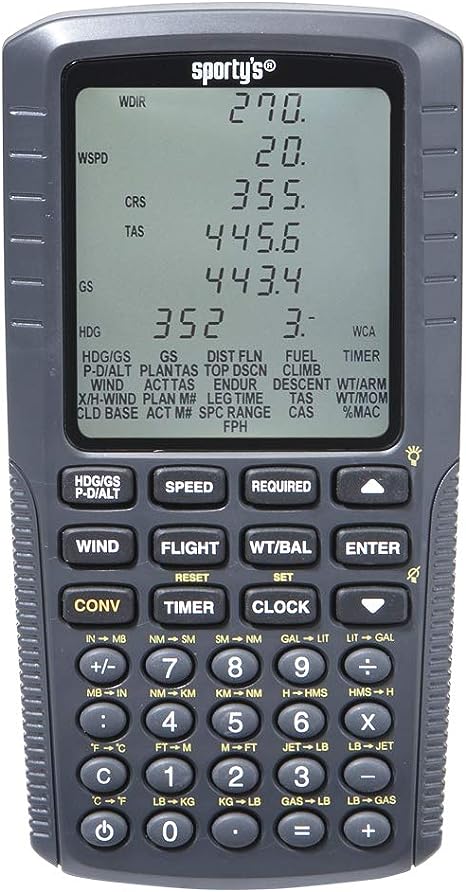 But it does everything a paper or metal mechanical computer can do at the push of the button. It features a simple backlit monochrome LCD and works on three AAA batteries.

According to Sporty’s, their electronic E6B does: