A pilot’s is full of all sorts of wonders. However, two items spark the most interest when you first bring them home. They are, of course, the E6B flight computer and the navigational plotter.

In today’s world of smartphones and Google, these items look to some like they belong in a museum. So how can something like this still be considered useful?

Well, let us count the ways these wonderful items are still worth having and take a closer look at the trusty navigation plotter.

What is a Navigational Plotter?

The plotter looks like a plastic ruler, but it’s specifically designed for pilots. In conjunction with an old-school paper aeronautical chart, it provides a quick and easy way to accomplish two tasks.

First, the ruler part of the navigation plotter allows you to make distance measurements on all three types of printed aeronautical charts. There are marks for measuring on sectional charts, the small-scale World Aeronautic Charts (WACs), or the large-scale Terminal Area Charts (TACs). Plotters are marked in nautical miles, but some still have statute miles as well.

And then there’s the round part that measures angles. This part of the plotter is used to measure your true course. You can convert this into a compass heading with some fancy pilot math and a few other tools.

They even make miniature versions that are a little easier to use in cramped cockpits.

The Two Types of Plotters

There are two distinct types of plotter, but both of them work pretty much the same. One is a fixed plotter, while the rotating plotter has a spinning, circular tool in the middle for measuring angles.

Both types are equally easy to use and do the same things. But like the E6B mechanical flight computer, they require some practice to get comfortable with.

However, once you’ve learned how to use it and practiced it a few dozen times, it’ll be a skill that sticks with you for the rest of your life.

How Do You Use a Navigation Plotter?

All actions you make with a plotter will start with a line drawn between two points on a paper chart. In most cases, this line will be the ground track you want to fly on a cross country.

1. Measure the Distance Between Two Points

Start by measuring the distance between the points.

You’ll need to identify which type of chart you’re using and find the correct scale to use on the plotter. Most of the time, you’ll have a sectional chart—and that’s usually the most prominent feature on the plotter’s long ruler.

If your line is longer than the plotter, mark the chart at the farthest point the plotter can measure. Then start again from that point, and add the two numbers together to get the total distance.

When measuring distance with your plotter, always double-check that you use the correct chart scale and the correct units.

Finding your course over the ground will depend on the type of plotter you have.

Fixed plotters require you to go into the measurement with a rough idea of what the result will be.

If you look at the angular measurements marked on your plotter, you’ll see that each position can provide you with multiple answers. The plotter will provide a precise answer, but only if you get it in the ballpark.

To do that, estimate what you think the course should be. Use what you know about the compass rose and some common sense. North is 0 or 360 degrees, east is 090 degrees, south is 180 degrees, and west is 270 degrees. With that in mind, you can look at the course line and get reasonably close.

With your estimation in mind, place the center hole (grommet) of the plotter over any point along your course where it intersects with a line of longitude. Lines of longitude run from top to bottom on your chart.

With the grommet over the intersection, make sure the long flat edge of the plotter is aligned precisely with your course.

Look at where the line of longitude exits at the top of the plotter’s round side. You should get at least two options. Whichever one is closest to your original estimation is the correct answer.

If your course is very nearly north or southbound, it may not cross any lines of longitude. Instead, use a line of latitude. But, you must then use the plotter’s inner-most scale to find the correct course.

A rotating plotter functions in much the same way. But these allow you to move the angle measurements around the grommet, which saves you a little bit of thinking in the process.

Start the same way–place the grommet over a line of longitude or latitude and align the plotter with your course.

While keeping the course lined up on the long edge of the plotter, you can now rotate only the center wheel until it is aligned with north and south on the chart. It has a black grid printed on it to help. You can use any line of latitude or longitude, just so long as the grid is perfectly aligned and north on the plotter matches north on the chart.

Your course is then read along your course line on the chart. Both directions are given.

No matter which style of plotter you use, always double-check yourself with some common sense. Is the number you got approximately correct on the compass rose? 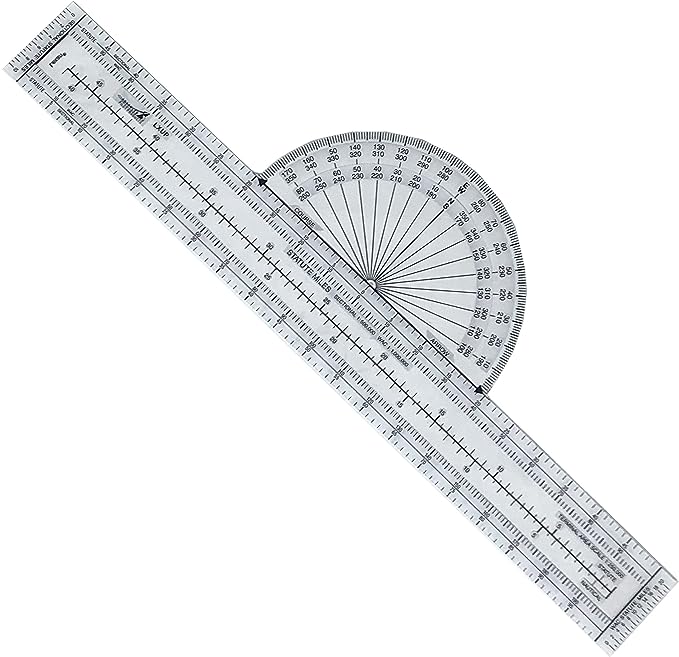 Of course, a pilot’s work is never done. Once you know the true course from the chart, you have a few more steps before you’re ready to fly a compass heading.