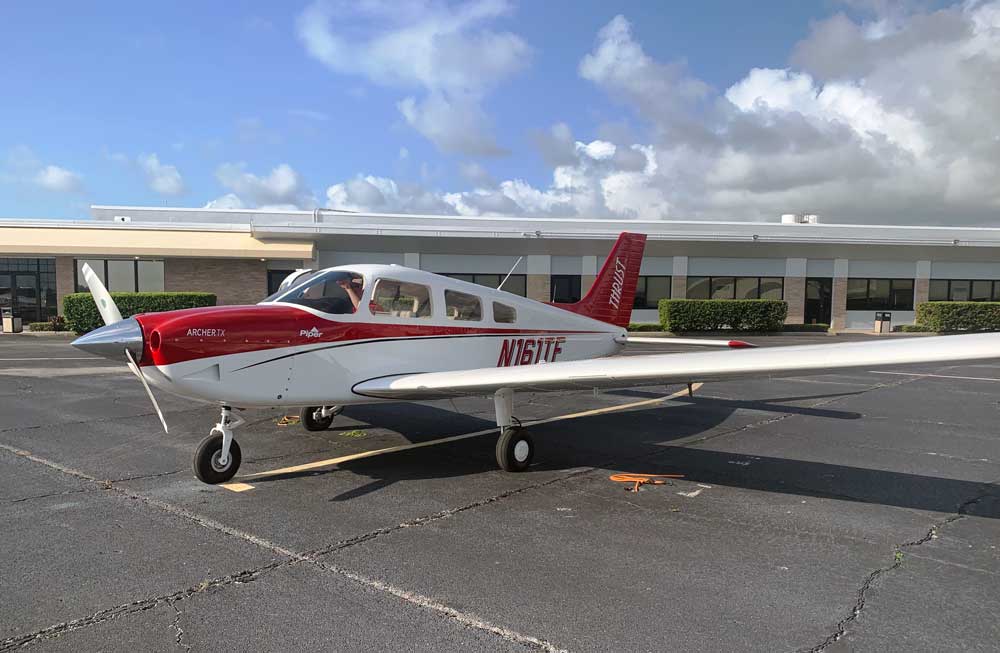 In 2021-2022 we purchased 20 brand new Piper Archer TX aircraft. These brand-new airplanes come equipped with the G1000 avionics suite and are air-conditioned to keep our students and instructors cool in the Texas heat.

The Archer is a four-seat, low-wing airplane that is fun to fly, turns heads everywhere it goes, and has kept countless pilots safe over its 50-plus-year run.

The plane is Piper’s current version of the PA-28, which has gone by many names over the years. More than 32,000 airframes from the PA-28 family have been delivered. 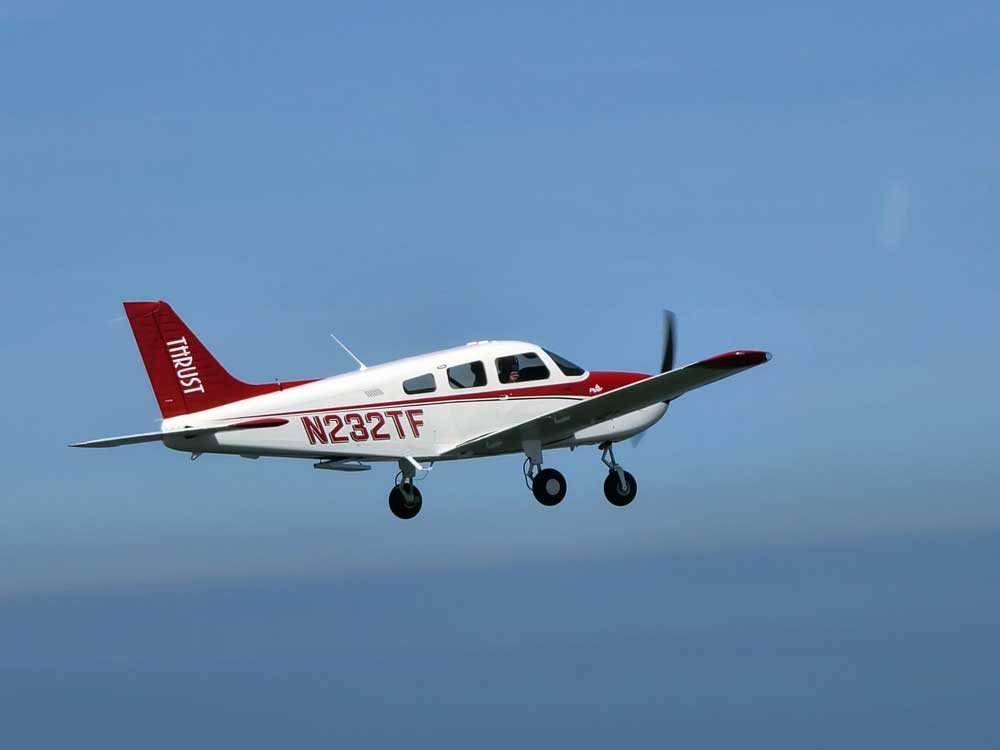 The Piper Archer TX is the newest airplane to join the Thrust Flight fleet. These immaculate, air-conditioned aircraft are a joy to fly and make for a fantastic trainer for any new pilot.

History of the Piper Archer

The FAA granted the type certificate for the first PA-28 in 1960. Back then, it was called the Piper Cherokee, which was Piper’s answer to the popular Cessna C-172 trainer. The first two versions were the PA-28-140, PA-28-150, the last digits referring to the engine’s horsepower.

The planes were a great success, and in 1962 Piper released the Cherokee 180. In 1964, a Cherokee 140 was added as a budget two-seat trainer. The Cherokee Arrow (PA-28R-200) came out in 1967 to fill the need for commercial training, with retractable gear and a constant-speed prop.

And so, with improvements to the design came new names. One of Piper’s biggest changes was a modified wing planform. The original Cherokees had straight “Hersey Bar” wings.

Newer generations have longer tapered wings. So, along with a few updates to the fuselage, the new 150/160-horsepower planes were called Warriors, and the new PA-28-180 was named the Archer. The first Archers came off the assembly line in 1972.

You’ll hear other names of similar PA-28s like the Dakota, a 235-horsepower version, and the Cadet, a two-place trainer built in the 1980s. The Cherokee Six (PA-32) was an extended version with six seats, and the retractable gear version of that was known as the Saratoga (PA-32R).

A twin-engine version is known as a Seminole (PA-44-180). Beyond a few aesthetic changes, the occasional t-tail empennage, and performance differences, not much changes between these models.

Piper still makes the Archer, Arrow, and Seminole at their factory in Vero Beach, Florida. The Archer is available with a conventional avgas engine or a new diesel powerplant from Continental.

So why did Thrust Flight choose to add the Piper Archer to our training fleet? We’re taking delivery of 20 Piper Archer TXs, and here’s a list of just a few reasons why.

It doesn’t get much more simple than an Archer. These planes have a proven design that is reliable and trustworthy but still attractive.

From their cable and pulley flight controls to their Johnson bar-controlled manual flaps, these planes are easy to fly and easy to maintain.

The Archer is a joy to fly. It is pleasantly responsive and fun to do maneuvers in. Even still, it is predictable and easy to learn.

Our Archers are air-conditioned to beat those Texas summers. Staying cool is a big deal in small planes. The more comfortable you are, the better and faster you will learn.

One of the world’s most popular trainers

Pipers are extremely popular training aircraft for all of the reasons listed above. They’re used by many of the largest flight schools in the world, including Flight Safety, UND, and now Thrust Flight.

If you’re used to flying your trusty “Charlie 172,” you’re in for a real treat. While the performance, size, and overall specifications of the Archer and Cessna are very similar, they are very different planes. Here are a few key things you’ll notice on your first flight.

Pipers lack those stiff-and-sturdy spring steel landing gear struts. Instead, all three wheels have oleo shock absorbers, giving you a much softer ride on the ground. But it’s also much more like what you’ll be flying in the future since nearly all bigger planes are set up like the Piper.

You’ll feel like a jet pilot thanks to the Piper throttle quadrant.

High-wing planes are renowned for their excellent visibility–when looking down. And while watching the ground go by is fun, pilots usually have their heads in the clouds.

The visibility from a Piper is outstanding. You can still see down, but you can also see much better all around. You are farther from the wing, so it takes up less of your field of view. And when you turn, you have a clear line of sight to see where you are going.

Instead of a conventional elevator, Pipers have a stabilator. The entire horizontal surface moves with the yoke. The anti-servo tab dampens the effect a little, making the whole thing easier to fly.

The number one question students ask is, “Which one is better?” There’s no easy answer–they’re different designs, each with pros and cons. However, once you have a few hours in both, you’ll see many more similarities than differences. They both fly like airplanes, after all. So you’ll have to try both and make up your own mind on that one.

Want to see more of our fleet? Check out our Cessna 172, Piper Seminole, and Sportcruiser aircraft.

Ready to fly a Piper Archer? Give us a call or fill out our contact form and we’ll help you determine which program is right for you.