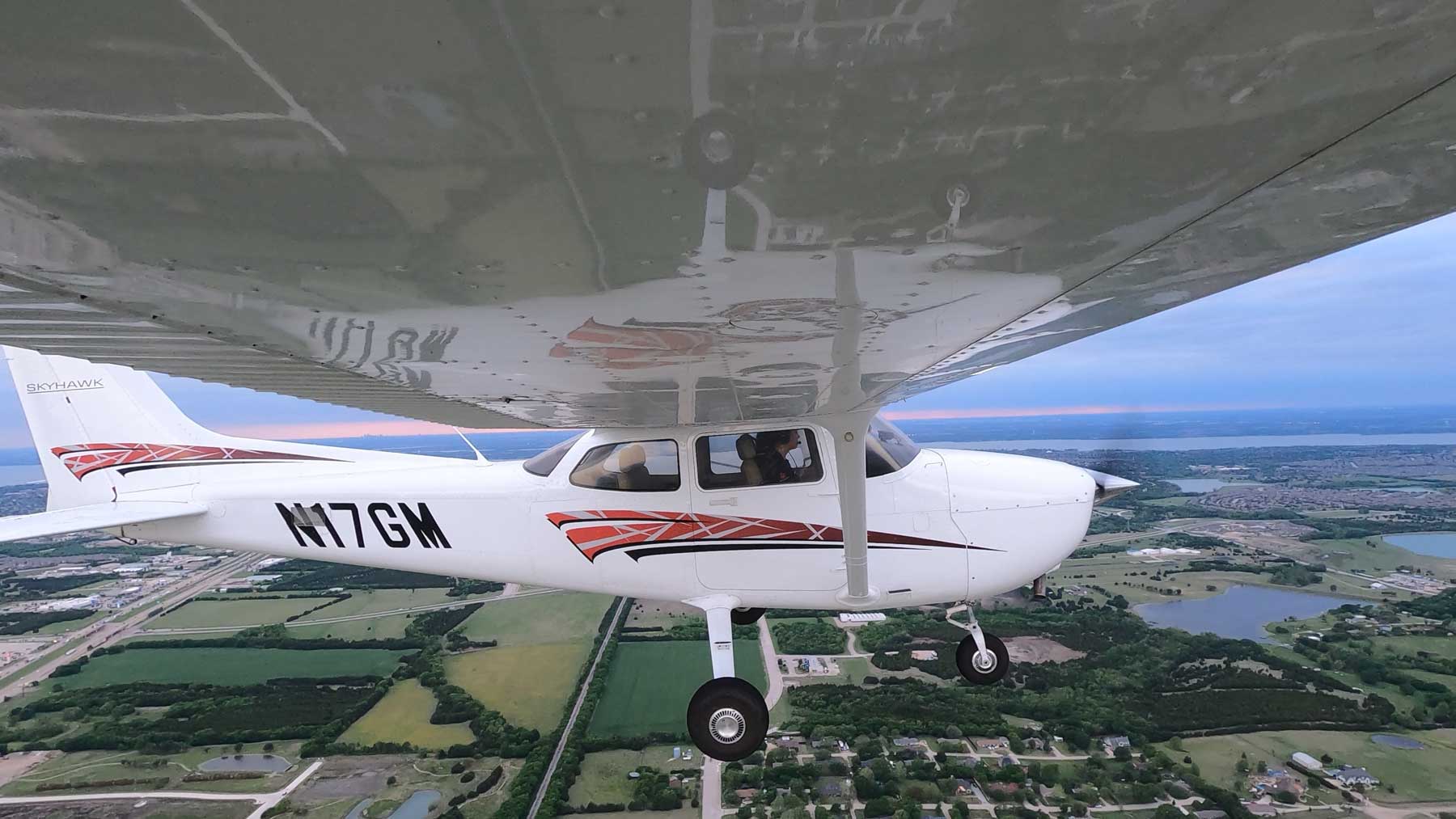 Discover why the Cessna 172 Skyhawk is one of the most popular trainers in the world.

Nearly every flight school around the world has at least a few Cessna 172’s in use. Many of the features listed below are the reason. The 172 is aerodynamically stable and easy to handle for new pilots. The high-wing design gives the student a bit of added visibility.

Another reason it’s popular among flight schools is the standardized components. Since the plane has been around for so many years, parts are readily available so the plane doesn’t need to spend time at the mechanic’s shop waiting for parts like other models may have to do.

Overall, the Cessna 172 is an incredibly popular aircraft for good reason. How do you feel about the Cessna 172? Let us know in the comments below. 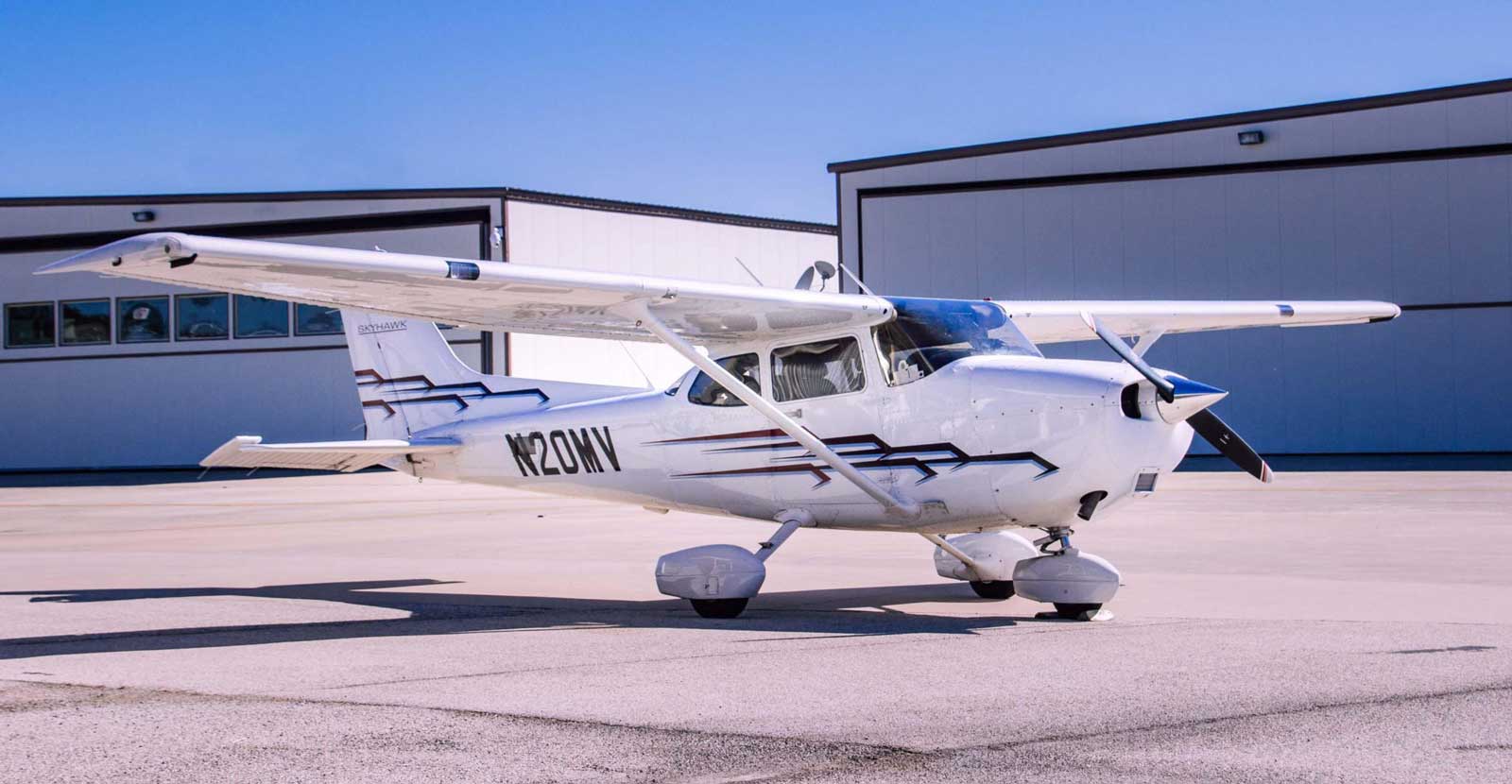 The most common aircraft in the world, the C-172, has been a staple in aircraft training since its inception in the mid 1950s – but our fleet isn’t that old. Our air-conditioned Garmin G1000 equipped 172s are all 2018 models or newer, including 2 new 2020 models.

Quantity in our fleet: 5

Watch the video below for a detailed look at the preflight process. And then take a look at our article on the Cessna 172 preflight checklist for tips on how to do an effective preflight.

This information is displayed on two screens in the cockpit, together with altitude, airspeed, and geographical position.

A pilot had the capability of recovering from unwanted altitudes with just a push of a button on the autopilot.

The earliest model of the 172 which debuted in 1956 saw a variety of changes and upgrades, including the creation of special variants such as the 172 Hawk XP seaplane and a proof-of-concept electric-powered Cessna 172.

In 1986, the 172 ceased production, after almost 20 years due to liability concerns. Cessna, a company established in 1911 was acquired by Textron in 1992. Production of the 172 model resumed in 1996 after the General Aviation Revitalization Act of 1994 was passed.

Engineering efforts were channeled towards the building of the 160 horsepower 172R Skyhawk. This model was the first 172 which was fitted with a fuel-injection engine and had a redesigned interior and ventilation system.

Due to its multi-purpose capacity and robustness, the Cessna 172 remains popular. While there are other faster and more agile planes from competitors like Beechcraft and Piper, the Cessna is relatively easier and less expensive to maintain.

Due to its popularity, parts are readily available and nearly every aviation mechanic has worked on a 172.

Record Setting Flight in a 172

Robert Timm and John Cook’s names are synonymous with the C-172. It’s hard to talk about this plane without mentioning the world record for flight endurance undertaken by these two pilots from December 4, 1958, to February 7, 1959.

With a registered Cessna 172, Timm & Cook took off from the McCarran Airfield in Las Vegas, Nevada, and flew the 172 for a total of 64 days, 22 hours, 19 minutes, and 5 seconds. This world record was done to raise funds for the Damon Runyon Cancer Fund.

History of the Cessna 172

With the Cessna 172, you get almost everything you want in a plane. Whether you want an afternoon joyride, short-haul trip with friends, or you’re trying to build time, the 172 is exactly what you need.

Undeniably the most popular aircraft, the C-172 is the most produced aircraft in the world with well over 44,000 units produced.

It was 1956 when the world first met this beautiful aviation marvel. With a foundation crafted from the 170, the Cessna 172 was designed with unique features such as an angular tailfin, lowered rear deck (which made it possible to add a rear window) the tricycle landing gear and larger elevators.

These modifications increased the plane’s popularity, with at least 1,400 airplanes produced within one year of its debut. Today, there have been more than 44,000 units produced, cementing the Cessna 172 in aviation history.

Want to see more of our fleet? Check out our brand new Piper Archer TX, Piper Seminole, and Sportcruiser aircraft.

Ready to achieve your aviation goals? Give us a call or fill out our contact form and we’ll help you determine which program is right for you.