In this article, I’ll help you decide if the Bose A20 aviation headset is right for you.

One of the most popular options on the market is also the most expensive—the Bose A20. If you’re new to aviation, the sticker shock might require a while to get over.

But is the A20 worth the money? Let’s take a closer look at this now-legendary headset and find out.

The Importance of a Pilot’s Headset

First off, take a moment to consider how vital a pilot’s headset is.

A pilot’s headset needs to perform a minimum of two essential tasks. First, it must eliminate cockpit noise, and secondly, it must make it easier to communicate. Both jobs are pretty important.

The first job’s arguably the most complicated, however. Noise is a complicated thing, and airplane noise doubly so. Small airplanes are built light and have very little insulation against the engine drone or wind noise on the airframe. What’s more, their engines run at high power constantly.

Several studies have been done to look into just how noisy the cockpits of light planes are. One study found that the average noise level was around 86 decibels, regardless of whether it was a single-engine C-172 or a twin-engine PA-44. This number places the noise level above OSHA standards.

The FAA has also studied noise levels inside the cockpit. The bottom line is simple—airplanes are noisy environments. Long-term exposure to it can cause hearing loss. But beyond the dangers of hearing loss, there’s the less-often discussed problem of pilot fatigue.

The issue of fatigue is difficult to correlate to noise levels, especially on the individual level. When you begin flying for your private pilot’s license, you’ll only be sitting in the plane for an hour or so at a time.

It’s not until you do a few longer cross countries that you’ll start to identify just how comfortable and effective your headset is. The more time you spend in the plane, the more likely you will start feeling tired or even suffering headaches.

Are you constantly fiddling with your headset? Is it crushing your ears or uncomfortably pressing on your temples? If so, it might be time to start looking for something more comfortable.

Why the Bose A20 Headset Rocks

Bose’s first foray into the aviation headset market was the popular Bose X. This headset was revolutionary for its day.

Instead of relying on tight clamping pressure on the pilot’s head or a ridiculously bulky design, it used high-quality active noise cancellation technology to reduce noise levels.

The Bose headset line has progressed from those early models to the A20 of today. Their noise cancellation technology has only gotten better in each generation.

Most pilots agree that the Bose A20 aviation headset shines brightest in its comfort. The headset is low-profile and lightweight (it comes in at only 12 ounces). The sheepskin cushions are comfortable to wear and the clamping pressure is just the right amount of force to stay on your head without being an annoyance.

As a result, nearly any pilot can wear them for eight or more hours per day without any complaints.

Bose claims their headset has 30% less clamping force than conventional aviation headsets but they don’t say what headset they are comparing it to. But when I compare it to other cheap headsets I’ve used during my flight training, there’s definitely a difference.

And the active noise-canceling technology means that the headsets remain effective even if the seal on your ear is less than perfect, such as when you’re wearing sunglasses or an IFR training hood.

The A20 comes in two versions—one with Bluetooth and one without.

The Bluetooth feature is handy if you fly with a tablet, as you can hear notifications and warnings in your headset while flying. It’s also possible to use it as a hands-free phone headset while on the ground, which is handy if you’re picking up clearances or need to talk to Flight Service.

This is a feature many lower-budget aviation headsets lack. The control module allows you to access a number of features. It includes an auxiliary audio input with priority switching so you can set up audio from different systems.

It allows for adjusted volume control on each side of the headset and switches from battery power to airplane power which will reduce how many batteries your headset goes through.

The Bose headsets are supported by an excellent company, as well. They stand behind their products and even offer trade-in programs for pilots looking to upgrade to a newer model. Customer service is excellent, and the modular design of the headsets means that they’re easily repaired, and replacement parts are readily available.

I’ve sent mine in for repair in the past after a small component broke. The turnaround time was incredibly fast and they refurbished the entire headset instead of just the broken part which was nice. Everyone I’ve spoken to who’s had to send their headset in has had the exact same experience.

You can check out Bose other aviation headsets here.

Disadvantages of the A20

Like a well-qualified applicant sitting down for a job interview, listing things that the A20 is bad at starts to sound silly.

Some pilots balk at the active noise cancellation in the A20, calling it “too effective.” While this sounds ridiculous at first blush, there is something to their argument. After all, noise is an essential tool in the pilot’s arsenal of troubleshooting.

Is the headset so effective that it blocks out warning horns, like gear-up warnings or stall horns? You can still hear these things, but they’re certainly somewhat muted while wearing a Bose headset.

What holds more water in the argument is that the pilot should be in tune with the engine’s noises. Slight changes in tone or pitch could indicate a problem. If the engine noise is too muted, will the pilot notice?

This is certainly a valid concern, but it’s likely blown out of proportion. You can still hear the engine running when operating the Bose A20 aviation headset. If you noticed something you wanted to pay more attention to, you could switch off the active noise cancellation quickly and easily.

Overall, the benefits of being less fatigued, more comfortable, and more alert far outweigh any negatives.

Finally, the most significant disadvantage of the Bose headset is its purchase cost. At around $1,000, it’s undoubtedly the most expensive headset on the market (check out the current price here). But most pilots who spend the money keep using the headset happily for years. It’s also worth noting that the resale value of used Bose headsets is very high.

What Comes with The Bose A20 Headset?

When you purchase a Bose A20 aviation headset there are several other items included. You’ll get the control module, mentioned above, a set of AA batteries, an aux-in cable adapter, an in-line clothing clip to keep the cord out of your way, and a carrying case.

I recommend grabbing a few extra batteries to keep in your . If you don’t already have a , check out our post on our favorite flight bags.

Wrapping up the Bose A20

Pilots aren’t wanting for more choices in their headset decision. Like a pair of shoes, each pilot should pick a headset based on their fit, comfort, and budget. But don’t underestimate the importance of a high-quality pair in your flying.

If flying for six or more hours a day is in your future, you might be happier to invest in a high-quality headset now rather than later. Personally, I’m a huge fan of the Bose A20 aviation headset and will continue to recommend it to every professional pilot I know. 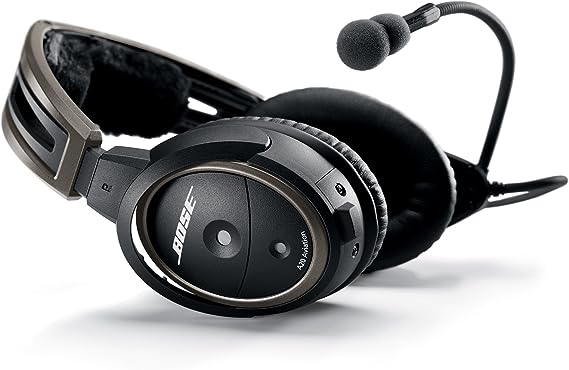 Bose A20 Aviation Headset with Bluetooth

The A20 is one of the best aviation headsets on the market. It's comfortable to wear for those long flights, has excellent active noise reduction, and incredibly clear audio.

Buy Now
We earn a commission if you make a purchase, at no additional cost to you.

Thinking about giving the A20 as a gift? Check out our other top gifts for pilots for more ideas.